There’s a little red-faced man,
Which is Bobs,
Rides the tallest ‘orse ‘e can-
Our Bobs.
If it bucks or kicks or rears,
‘E can sit for twenty years
With a smile round both ‘is ears-
Can’t yer, Bobs?

That is the ditty British troops would recite about Field Marshall Lord Roberts (1832-1914) veteran of the Boer War and the 19th century wars in Afghanistan. In this podcast, produced by Love Archaeology for Pod Academy, Tom Horne and Terence Christian explore the life of Lord Roberts whose statue in Kelvingrove, Glasgow has been restored recently. They talk to his biographer, Dr. Rodney Atwood (The Life of Field Marshall Lord Roberts) and then take a walk in the rain to Kelvingrove to see the statue.

Popularly known as ‘Bobs,’ Roberts was born in 1832 and died on the Western Front in 1914. Roberts won the Victoria Cross, as his son would go on to do, in the Boer War in South Africa. He’d also be involved in the strategic defence of India. As a course of this, he campaigned successfully in Afghanistan. Later on he also saved the British army from disaster in South Africa before going on to introduce army reform and campaigning for national service. He was one of the few who recognised that Imperial Germany was going to be a threat to European and world peace. 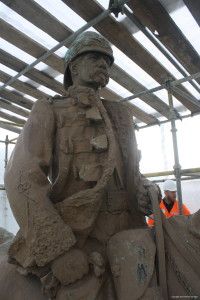 Before and after his death, Field Marshal Lord Roberts was honoured with memorials in Glasgow, Kolkata, and London and also, during his life, he was immortalised in poetry by none other than Rudyard Kipling. Also, being very much aware of the power of the press and the necessity to craft one’s own image, he published an autobiography entitled Forty-One Years in India. When he died visiting the troops in France in 1914, he lay in state in Westminster Hall – joining Winston Churchill as the only other non-Royal to have this honour bestowed upon them in the 20th century. Thereafter, he was buried in St. Paul’s Cathedral in a ceremony that can only be likened to that of Lord Nelson a hundred years before.

So who is this Lord Roberts, the person behind poems, and memorials throughout the length of the former British Empire? And why is a figure who was buried by his King alongside the bodies of Wellington and Nelson been neglected in recent years? This is a darkness and light story of empire, fame, notoriety, and charity. From hanging ‘traitors’ in Afghanistan and using scorched earth tactics and even concentration camps during the Boer War in South Africa to his family providing charity and opportunity for wounded veterans, Roberts—once paralleled with the Duke of Wellington himself—remains a compelling, if problematic, figure who won incredible victories including a famous march from Kandahar, foresaw the Great War with Imperial Germany, carefully crafted his own legend in pursuit of recognition at home, and even interacted with figures as well known as Rudyard Kipling and Lord Kitchener with whom he served in the Boer War.

Lord Roberts became our subject of long-term interest due to the proximity of his Glasgow statue. For many years, Lord Roberts’ state stood, nestled in a grove of trees, outside my house. I would walk by him each day on my way to and from the Glasgow University Archaeology Department. His prominence and anonymity—he seems to have every honour available and fought in every 19th century colonial war but without any sort of modern name recognition—made us wonder: “Who was this man of past importance?” The conservation of his statue by Nicholas Boyes Stone Conservation and Glasgow City Council in 2014/2015 made us even more curious. 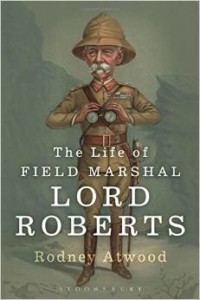 In researching Field Marshall Lord Roberts’ incredible and varied life—which reads as though it is a “Boys’ Own” adventure—we met his biographer, Dr. Rodney Atwood. Dr. Atwood kindly spoke to us about Lord Roberts.

After the interview, stay with us and we will walk down to Lord Roberts’ statue 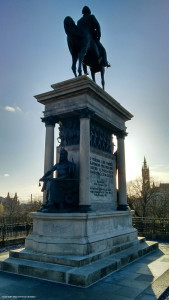 and discuss its aesthetics and place in the Kelvingrove Park landscape.