“We are developing the discipline of feminist legal history, which scarcely even exists in this country…Feminist history asks a different set of questions.” (Rosemary Auchmuty)

In this podcast about the Women’s Legal Landmarks project, author and barrister Elizabeth Woodcraft talks to Professor Rosemary Auchmuty of Reading University’s School of Law and Professor Erika Rackley of Birmingham Law School.at the very start of the project. Their conversation ranges over the aims and methodology of the work, some of the landmarks they will be exploring and, importantly, their aspirations for the project.

2019 marks the centenary of women’s formal admission into the legal profession.This was a key legal landmark for women but, of course, it was not first. Feminists have a long history of engaging with law and law reform with the result that women’s legal history is full of landmarks – key events, cases and statutes – shaping and responding to women’s lives and (diverse) experiences.

To commemorate the centenary of women’s admission into the profession, this project aims to bring together interested feminist scholars to engage in the process of identifying and writing about key legal landmarks for women. It will not be accounts of the ‘usual suspects’ – not, for example, the Equal Pay Act – but rather the Ford Dagenham women workers’ strike that was so important in the development of the legislation.

This discussion ranges across time and place – Scotland, Wales, Ireland and England. Importantly, it points to the campaigning that underpins all of these landmarks – from the campaigns for animal cruelty legislation in which women campaigners played a central part (because of the fashion for ostrich plumes in hats), and anti-slavery campaigns to recent campaigns for women on banknotes, and from the totally different style of campaigning by the women of Greenham Common to recent successful campaigns against rape pornography.

This is early days for the Women’s Legal Landmarks project it is estimated to be a two-year project (2015-2017) – there has just been a call for papers, and the first workshops have been held. So over the next few years, Pod Academy will keep you posted on progress. In the meantime, do get in touch with the project , they are keen to hear from women and men who want to celebrate women’s legal history. and to encourage the development of a network of feminist scholars and activists.

The collected landmarks (each essay between 1000-6,000 words) will be published in an edited collection, accompanied by an extract of the relevant primary material, photograph or other source. In addition, there will be a website in the form of an online exhibition with further links to primary sources. 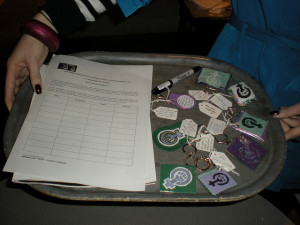 If you have enjoyed this podcast, you may also be interested in two of our other podcasts about women and the law.